​United Methodists come in all sizes, shapes, colors, dispositions, outlooks and life experiences, but they share a unique outlook forged in the shared experience of a church and a nation born in a century of remarkable change. No matter how or where they serve Jesus Christ around the world, United Methodists do God’s work in a unique connectional covenant. Our theological traditions are steeped in the Protestant Reformation and Wesleyanism, and similar ecclesiastical structures and relationships that date back almost two hundred years. John Wesley and the early Methodists saw their work in the simplest, most uncomplicated terms: Do all the good you can, to all the people you can, in all places you can. We are dedicated to a life of Christian purpose – a life of participation and personal responsibility, of generosity, sacrifice and self-restraint, responding to the call of Jesus Christ.

Today we speak many languages and live in many countries – with different cultures, ethnic traditions, national histories and understandings of Christian faith and practice. We are a covenant community, concerned about God’s children everywhere.

In life’s clouds of doubt and division, we see the sunlight of God’s purpose that brings healing, hope and harmony. We love worship, study of God’s word, music, church suppers, and a sense of community, a sense of belonging. We welcome people of faith into our churches, and people who are searching for answers to life’s tough questions, too, because we know what it’s like to fee alone and unsure… to need a welcoming place with open hearts, open minds, open doors. We roll up our sleeves and say, "Let’s get to work," as we answer the call to make disciples of Jesus Christ. We live the promise we made the day we joined The United Methodist Church… the promise of our prayers, our presence, our gifts and our service.
﻿
﻿ 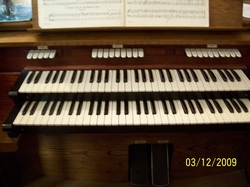 There is some evidence that a Methodist Society existed in Unadilla prior to 1854. According to Chaffee's "History of the Wyoming Conference," Unadilla was a part of the Otego Circuit and before that of the Otsego Circuit. Other records speak of the Tioga-Unadilla Circuit as being one of eleven in the Albany District back in 1802, when the Methodist Episcopal Church was divided into Conferences. Undoubtedly, this refers to the Unadilla Valley, for we recall that the early settlers made their homes along the rivers and waterways as these were then the only logical methods of transportation.

No known records exist, however, of the beginnings of Methodism in Unadilla. First records are Chaffee's History indicating information from April, 1832.

In April 1832, Moses B. Maxwell leased to the Trustees of the Unadilla Central Society of the Methodist Episcopal Church 76 1/2 rods of land. The yearly rental of this property was one peppercorn. Sometime prior to the building of the Church, services were held in the east end of the dwelling house of G. W. Hardy on Main St. Slab benches were constructed for seating the people. This building was erected by Judge Page and used as a store, and is as of writing of this history the property owned by Larry and Harriet Henchey.

In 1928, an extensive remodeling program was undertaken and fully paid for ($20,000.00 was expended); the large two story addition housing a new kitchen, dining room facilities, Sunday School rooms, etc. was added; the interior redecorated, new pews to take the place of the old theatre type wooden seats, new lighting fixtures, etc. were purchased. At this time, the organ was electrified. In 1950 the organ was enlarged. In 1954, various improvements were made, including a much needed modern heating system.

In October, 1967, a Unadilla Methodist Progress and Growth Crusade was undertaken and pledges totaling over $42,000.00 over a 3-year period were realized. This amount was spent in rennovations throughout the Church, the most notable being in the kitchen and dining areas and downstairs Sunday School rooms.

The parsonage, next to the church property, was purchased in 1867 and this too has been remodeled at several different dates as needs have arisen, the last time being a modern kitchen finished in 1952.

This history was at the time of our 125th Anniversary Celebration 25+ years ago.

In June 2006, our church basement was flooded beyond repair. During the period of rebuilding when our church family joined with Sidney Center and the Unadilla Presbyterians for worship, a redecoration project was completed in our church sanctuary. This restoration included implementing several improvements in our organ. The workings of the organ were moved into the Sanctuary behind the altar wall and the pipes were stenciled in the pattern of photos from the early 1900's. Floors were refinished, sanctuary walls and ceiling were repaired and painted. New fixture glass was installed and new fans and entrance lighting fixtures were also installed.

Rededication of the redecorated sanctuary and organ was held on December 23, 2007, 150 years after the original dedication. Pastor Earl W. Roberts III was Pastor for this celebration. Caputo Bros. of Norwich did most of the contracing, while Sidney Chase of Worcester did the Organ and Pipe restoration to design of 100 years ago.

Unless the LORD builds the house, those who build it labour in vain. Psalm 127:1

"My personal remembrances of this church and specifically this organ span an approximate sixty year period.

Prior to 1951, there were some significant changes that our history notes.

In 1928, there was an extensive remodeling program undertaken to add the rooms at the rear of the church. At that time the organ was electrified. The inner workings of the organ were buried in the floor behind the alter. The pedal chest and its pipes were buried in the side room with the organ blower. As I understand it was a very difficult situation for anyone to work on the instrument.

In 1967 it was noted that the organ was brought up to date in repairs but there was no replacement of components. I do remember that, for whatever reason, there was difficulty in getting service from the Binghamton organ consultants.

Under the direction of our organist, Mr. Walter Hunt, and several other church members much of the work was accomplished.

Walter L. Hunt was the organist for over 40 years.

Roger Brayman followed Mr. Hunt for at least another 20 years.

I would note that Carrie Lally was organist for a while and currently Mr. Lesh is our organist.

Back to the time line of the organ - At this point there was considerable discussion about whether to stay with the pipe organ or go to an electronic instrument. As I recall there were passionate feelings on both sides of the issue.

Finances, not an uncommon problem, reared its ugly head. But, with the help and extreme patience of Sidney Chase and the Chase Organ company of Worcester, NY we accomplish the first phase of the organ improvements in the early 1990's.

Through the next sixteen years, many memorial gifts, a previous organ concert, saving recyclables, and many dedicated people we were in a position to accomplish more improvements.

As people in this region are painfully aware, 2006 is memorable. We were forced at that point, because of the flood, to do extensive repairs and remodeling of the downstairs. Our sanctuary had long had some issues with a crumbling wall and needed refurbishing so we proceeded. The organ was included in these plans.

In 2008, the second phase of the organ renovation was accomplished. There are still some pipes that are buried in the recesses of the organ. We, so far, have kept this historic treasure. We are truly indebted to Mr. Chase, his craftsmanship and talent. Over the years we also are thankful for countless people who have in many ways helped us sustain this musical ministry. It has provided a vital expression of the spirituality of this church community and hopefully will continue to do so for many generations. "